Eggs by Teresa The art and craft of pysanky

Creating these eggs is a never-ending adventure in experimentation and I’ve made my share of poor color and design choices over the years.  It took me quite a while to realize it is okay to dislike a piece enough to destroy it and try again.  Now I give myself permission to cut my losses and move on sometimes.  It hasn’t always been this way, though. 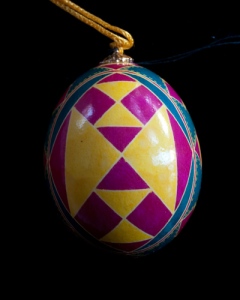 Let me tell you the story of what we refer to in my family as “The Ugly Cake.”  Years ago when my oldest son, Ryan, turned 14 I decided to try making an ice cream roll birthday cake like the ones at Baskin-Robbins.  The yellow cake part baked without incident and I dutifully rolled it up in a towel when it came out of the oven just like the cookbook said.  As I finished rolling it, I noticed a wrinkle in the towel so without thinking, I stretched the two side edges to get rid of the wrinkle.  Unfortunately the hot cake was firmly attached to the towel at this point and it split crosswise into two rolls.  Oh well, I thought to myself.  I can glue it together with the ice cream filling.  No one will ever know. 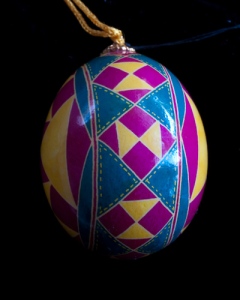 Once cooled, I gently unrolled the cake to find that not only had it split into two rolls, it unrolled with a series of cracks so deep that I could see the towel below.  Still believing I had a chance, I dutifully spread softened chocolate ice cream over the pieces of cake and rolled it back up as I went.  I could tell it looked pretty pitiful at this point, but hoping for the best, I stuck it in the freezer.

When I checked later, I realized the ice cream must have been too soft because the weight of the cake caused it to ooze out of all the edges of the cake.  Alarmed, I yanked it out of the freezer with perhaps a little too much vigor.  Because the ice cream wasn’t hard all the way through the cake, the top half slid right over the edge of the pan and onto my arm.

Ever the optimist, I scooted the pieces back together and decided I could still save it if I just made a chocolate glaze and covered up what I now referred to as the “Ugly Cake.”  I quickly threw together a decadent shiny chocolate glaze to try to hide the many mounting flaws.  However, I forgot the cake was cold and instead of flowing gracefully over its sides, the warm glaze just sat in a lump on the top of the mess.

Desperate now, I spread the glaze as far as it would go, shoved the cake back in the freezer, and drove with Ryan to Baskin-Robbins where we chose a cake from the many beauties in their freezer.  I did finally show the “Ugly Cake” to the rest of the family and we had a good laugh at my adventure.

The lesson here?  There are definitely times to admit your mistakes, give up, and move on.  You might even laugh about them someday.

This entry was posted on February 15, 2011 by teresamharbert. It was filed under Christian life, Grace, Uncategorized and was tagged with art, Christian life, egg, Egg art, grace.